Over a year ago I gave you my PvP honor kill counts. Lets update:

And a handful of alts with honor kills under one thousand. Actually every alt had honor kills.

I don’t think of myself as a PvPer.

*glares at the laughing people* Stop that. We can be casual raiders, why not casual PvPers.

Aurum has been on vacation for the last four months. (For those that care, her hair is green now.) Selenium has been relegated to Guild bank toon. She may have to come out of retirement for huntery goodness.

The skills needed in BGs and Arena are different. You can have a lot of success in BGs and none in Arena. I know that just in the 19 and 29 a spec can be faboo in BG and suck in Arena. Many people find the twink brackets as boring. I think they don’t know how to challenge themselves. Even more importantly they are not those that go back and analyze what they did in a fight to make themselves better.

I don’t have the time to put in the effort at max level PvP needed to be any good. Friends tell me that I am good. What I see is that I play for objectives. When I say Tower Point is mine, they know that it will be. When I say that Fel Reaver ruins is mine, it will be one of the lasts to be taken. (If you see me in-game those are the two places I will be. Come say hi.) I will work hard for my team. … which totally pisses off the “Just let them win.” players. 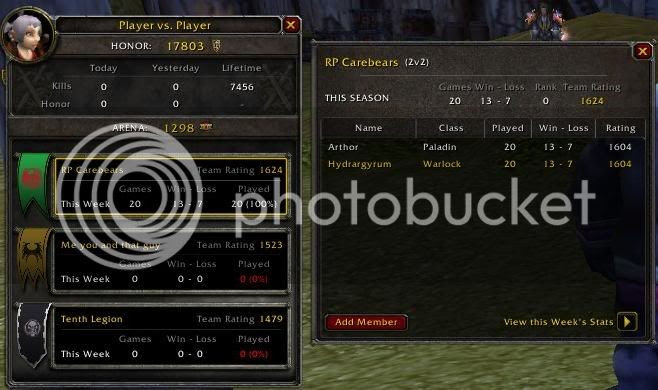 As for Arena, I do it for the fun. As soon as my ret pally friend wanted to try out his OPness in 3.0.2 we hit the rated games. I played Haunt. I played what I call a “squishy lock” and we still won lots of games. We even beat a ret pally/ret pally team! As we climbed higher than 1600 we started going up against Season 4 geared players. That was wild. I still do not understand why our personal rating is lower then team. At the end of the night I was under 1600 personal rating.

I don’t feel like it has changed…
Hydra does not PvP.
Posted by Hydra at 7:55 AM