Yea, even I don’t believe that statement right now. If I was this would not be my first post in all of July! July would have passed us by and I would not even notice that I didn’t have an update.

The Spawn went to her first San Diego Comic Con this year. She completely enjoyed all the people. At the same time, she hated all the people. It was a bit overwhelming. The second day was much better for her. Here she is at the DC Comics booth checking out the DC comic app on the iPad. 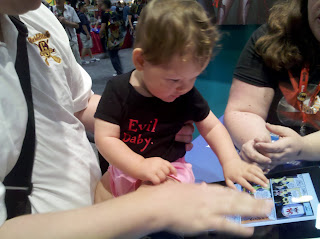 She liked making the comic really small on the screen. Once it was tiny she tried to pick it up with her very strong pinching.

YES! That is an “Evil Baby” shirt The Spawn is wearing. You can pick it up here. If you don’t know about the Oblongs go find out. I met Angus Oblong at the Anaheim Comic Convention this year. You know this baby shirt was a MUST BUY NOW!!!

Not only have we been hitting comic conventions this month, but I think we went to a few different comic stores, in three different counties. (This is a new realization. … I don’t know how I feel about it yet.)

We also have been biking to get more active. The Spawn likes being in her trailer while riding. I got a hitch for Husband and my bike so we can switch off. We go out for a couple of hours. We try to do this before it gets too hot. I have a tendency to freak out about The Spawn’s hotness after a while.

This makes for interesting diaper changes the next day.

On the WoW front…

The guild has split into two 10-mans. I’m not in either. I just cannot guarantee that I can be on when I am needed. A part of me is a little grumpy about this. But see above… for all the stuff I have been doing.

I am committed to at least start playing again, even if it is for only an hour. There was weeks there I was on Twisted Nether Blogcast more then I was playing the game. I’m working on changing that. And you can always hear me chat about WoW happenings there.

First thing was to do the quest chain to get my Panther Cub. I had no idea this was a quest item! I was upset I didn’t do it before Firelands came out. If you didn’t know it came out back in 4.1.

The next thing I am doing is finishing off questing in Twilight Highlands. I married off the dwarves but then stopped at helping the dragons. I was more interested in the political ties between the dwarves then the dragons. I am trudging through that, forcing myself to read the quest text. Well some of the time.
Posted by Hydra at 10:31 AM No comments: