I have my first rated piece of PvP gear! 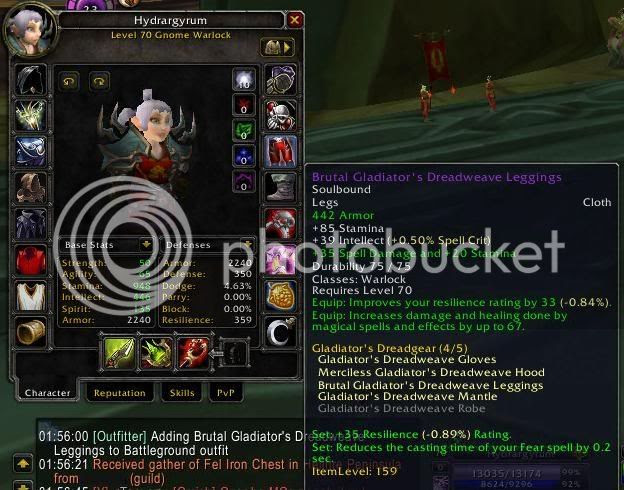 My 2v2 partner and I were having fun. Running games over and over. There were some where we out lasted an identical team, Healy Pallie and Lock. The one that gave us the hardest trouble was a Hunter/Pallie team.

Our mistake was to assume the Hunter was Marksman but sadly it took us three losses to realize that the hunter was Survival. *sigh* We did get our rating after our second week of playing above 1500 (we skip weeks). But an unfortunate queue later that night put us up against our bane for the night. We lost yet again. *grumbles about stupid traps*

A friend of ours hopped into our channel to chat while we were doing our 2v2s. He listened for a while and asked if we had a 3v3 team. I handed him gold and told him to sign us up. My dear sweet Retribution Pallie friend has a Challenge title from last year. I figured the gold was worth it just for even one week to help us understand our own dynamic and learning about the other classes.

And I was schooled alright.

We had great winning streaks. A RMP team CC us to death. Which was expected. Hopefully next time we will be able to us Megan's strategy effectively.

My biggest thing was to get across how important it was to get the rogue, warrior, or shadow priest off me. I think the “Ow Ow Ow warrior Ow.” or the “Get it. Get it. Get it. Rogue killing me.” moved us in the right direction. I also learned about a very lovely spell called Blessing of Freedom.

We kept hovering around 1500. To the point were I told them I refused to look cause I was having too much fun just playing. I didn’t want the pressure on a game to be concerned about rating. So when our game became 3v1 and congrats went out on my pants, I was shocked to giddiness.

It was not expected at all.

After I enchanted my new pants, we did some AV. With some buffs I almost hit 17K health! I didn’t have Naltog with me or stamina food but I could have pushed myself over the edge. No I will not be going into Arenas with all that extra stamina, but that sure looked nice in battlegrounds.
Posted by Hydra at 10:42 AM