In an Epic Titanium World

When I was under 25 thousand gold I actually felt wow poor. Silliness I know. I run in groups that half the wow gold cap is the norm. At 40 thousand gold I not only have a Traveler's Tundra Mammoth have bought a chopper as a gift. I can now buy two more mammoths and have gold left over.

I have surpassed my passive goal of 40 thousand gold. I continue to auction my normal tailoring items and reselling stacks of eternal into singles. But the last 15 thousand was from speculation on epic gems and new gear.

As soon as the announcement that epic gems will be available from Titanium Ore in patch 3.2 I started stockpiling. I bought ore in the auction house anywhere from 5 to 10 gold apiece.

When the patch 3.2 came out I had 1,860 pieces of ore to be prospected.I found a nice guildie Jewelcrafter who would prospect them for me. I told him I had a ton of ore. More specifically described as a bank tab full. 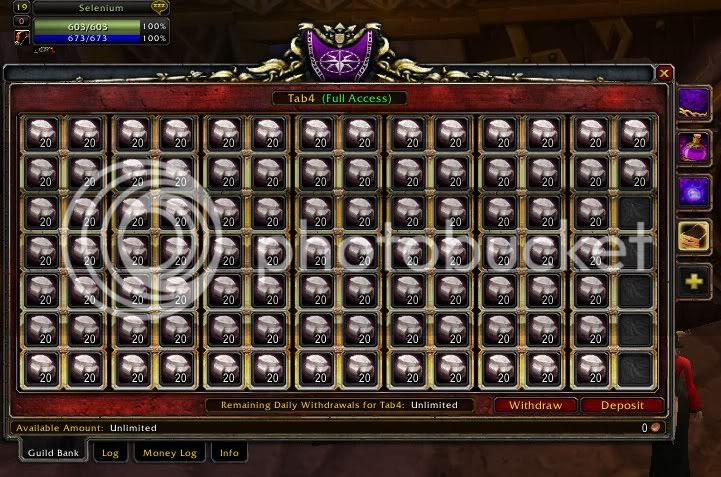 I received 89 epic gems. Just under 4.8% of the ore produced epics. This was a lot higher then I expected.

I am not a JC and am only selling the raw gems. Some things I kept in mind.
I recouped all my gold invested in this little adventure. In the first 48 hours I made over 4 thousand gold. Epic gems those first few days sold for 300-500 gold. I have only put up three gems each at a time. Same with the superior quality gems.

I have less then a stack of each of the green gems left. So far I am having luck at selling green gems at pre patch 3.2 prices.

It took me a day or two to realize that Titanium Powder was used for buying the epic JC patterns. A few stacks made good payment to my jewelcrafters as a thank you.

Now I am back to normal business. I don’t need to go for outside help. It was sure a wild ride.
Posted by Hydra at 4:04 PM