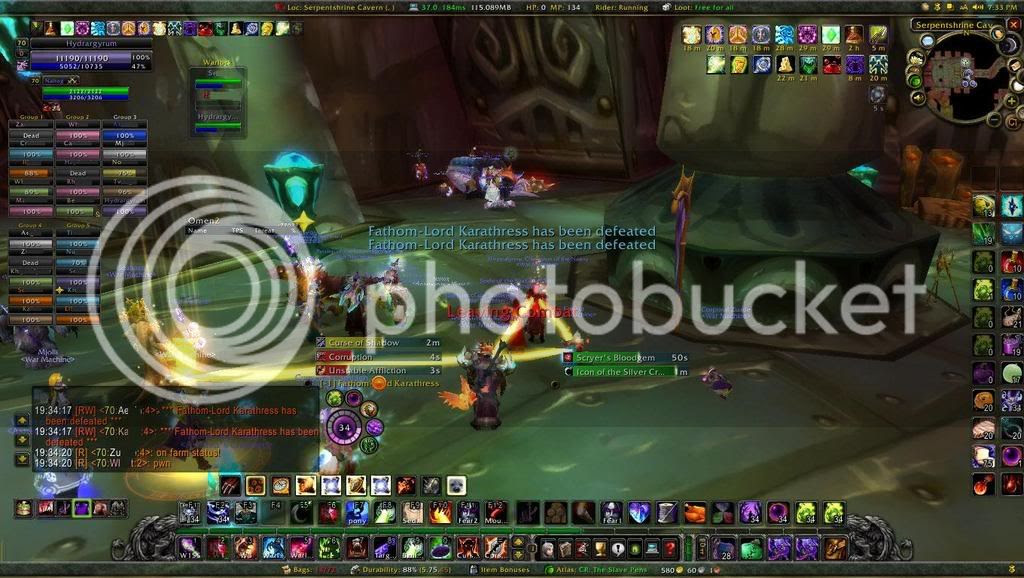 Another boss, Fathom-Lord Karathress, goes down. After a couple of false starts we took two attempts to get him down. That just leaves Lady Vashj.

The pull was fun to learn. It feels very similar to the High King Maulgar from Gruul's Lair, where the raid has to time the pull to put each of the 4 mobs into their corner at the same time. We had 3 false starts, the pulls were not quite right. We reset the boss those times.

I was assigned Fathom-Guard Caribdis. My main roll was to keep curse of tongues on her. Also, I threw up a curse of shadow on all the other mobs . While doing my curse duty, my Rogue and I was also dealing damage. The warrior, rogue, and shaman did the healing interrupts. In the two real attempts, by the time the raid came to kill her, they had about 50% left.

It was fun. We learned a new fight.

Afterwards, with what time we had left of raid we went for Leo. We were a little short on dps. Also, it has been a while for us, the dps on and off was a bit off. We got him to 1%!! But it was raid time. So no killing Leo this week.

Best news! I have to say I was not looking forward to Leo. With that said ... My inner demon and I have come to an understanding. It dies, when I say it needs to die. We cuddled after the raid.
Posted by Hydra at 9:23 PM