As you can see my hit rating is a lot higher then I normally carry. I have been trying to actually reduce my hit gear. Unfortunately that has not been as easy as I hoped.

Looking at a non-Suppression Affliction builds, I was just not happy. To move down the Affliction tree you have to put those three talent points into the first three tiers. There are no talents that are a solid choice other then Suppression. I tried a few... and naa daa.

With considerable bitching and moaning (and not the good kind) I decided to just go Destruction.

I tried a Destruction spec without replenishment. I was not happy with it. Most likely the culprit was no training dummy time and the fact that I did it 15 minutes prior to raid after contemplating about it for 90 minutes.

Off to a training dummy.

Third test with self buffs and Curse of Elements. Naltog and I in a 3 minute test had 3834.3 dps.

In subsequent tests at times I was over 4K on the dummy.

The numbers are not important at all. Just self noteworthy. All the test were done with different scenarios. There were different buffs, different stats, different times, different conditions, etc. I think the second I was reading guild chat at the time.

Shoot I haven't even started plying with my glyphs yet.

This reminded me of something though. All the numbers don't help you one bit if you don't GET OUT OF THE FREEKING FIRE!!@!!!@! 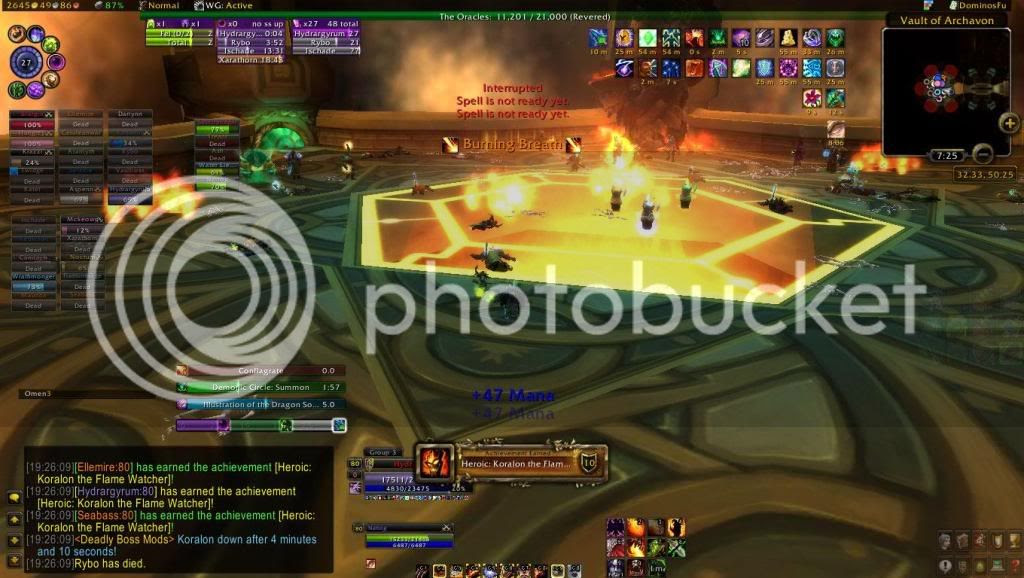 Also you get 1068 honor for the three kills in Vault. On Emalon I had a /roll of 99 and now sporting Furious Gladiator's Felweave Handguards. This is my first PvP item to have a higher rank then my PvE gear.
Posted by Hydra at 5:11 PM