With Cataclysm out in less then two months. There is better things for the community at large to be doing...

Like figuring out a list of changes 4.0.1 does to our gear, mounts, gems, glyphs, Mastery, and any number of things. ...

That is not going to happen just now.

But I will pass on somethings Faidwen has been posting in my Guilds forums to "help" out the locks. (I think it is a devious plan to keep warlocks in raid so he doesn't have to summon raiders or make Soul Wells.)


Nerfs and Buffs will continue. So don't get to set on anything right now. Ride this out and focus your time on figuring out broader things then exact specs and gear, because you will have to re-figure it out in under two months.
Posted by Hydra at 11:16 AM 5 comments:

Cataclysm is starting. We were told last week that December 7th is the release date of the next expansion. Today was the release of the EXTREMELY large patch of 4.0.1.

What to expect to be broken:
There are a WHOLE bunch more things. This is the start of “World of Warcraft 2.0.”

Oh… and did I mention that your Lock will have completely different playability with the new shard mechanic. It is so simply stated in the notes. I see some time on a Training Dummy in the spare minutes I get to play WoW in my future.


Warlocks
• There is now a new spell fly-out UI feature for warlock pets. Clicking on this single button will open up the list of available pets to summon.
• Soul Shards have been removed from the game as items. Instead, they now exist as a resource system necessary for using, or altering the mechanics of certain spells.

Good luck to you. May the computer and internet gremlins /ignore you today. 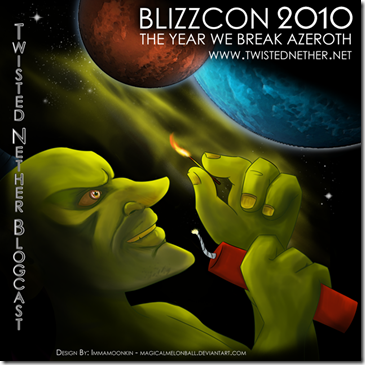 I will be at the TNB Blizzcon Meetup on Friday, Oct 22, 2010. The party is at Bubba Gump Shrimp starting at 9 PM in Anaheim.

Get details on the TNB Blizzcon Meetup on the site.

We will be giving away lots of prizes. Though I would think meeting me in the flesh was a great enough incentive to show up. If you are attending Blizzcon or are in the area come by and say hello to all the bloggers that will be there.

I look forward to seeing you drunk and singing!
Posted by Hydra at 6:59 AM 1 comment:

Email ThisBlogThis!Share to TwitterShare to FacebookShare to Pinterest
Labels: podcast

You may have noticed that I have been /AFK for a few weeks now. If you listened to Twisted Nether Blogcast you would know why.

September 21, 2010 the Spawn decided to arrive. She is healthy and a really good baby.

Right now she likes to be up at raid times so we will see how much of that I will be able to do. Wednesday I was able to work on hardmode Putricide with her lying on my chest. But that only lasted for about an hour. It was one hour longer then I thought I would get in.

I am around. If you need to contact me leave a message here, by twitter @HydRAWR, or by email HydRAWR at gmail dot com.
Posted by Hydra at 10:52 AM 11 comments: