The Spawn will be turning one in September. Invites to her first birthday party went out and were received. (This is not even close to a Warcraft post so you can stop reading if that was what you were looking for.)

I looked at a lot of different stores both online and around town for the perfect invite cards. My crafty streak kept telling me “You can make them.” But I still searched... and searched. 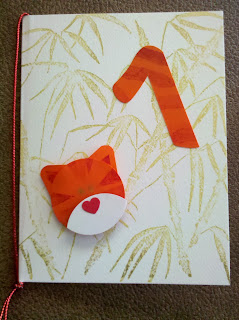 I ended up making them.

Why all this effort? She doesn't care … actually she does. If given the choice she would want me to hand them to her so she can pull, chew, and rip apart all the paper.

I am doing this because one of the invites will go into her baby book. Maybe ending this year. Maybe starting the next. Either way, just like her Baby Shower invites her Aunt made, this will be represented.

And I will have made them. Additionally, in the future I may not have the time to make them and I do now.
I used a stamp to make the bamboo forest. I used rubber stamp scraps to make the stamps for the triangle stripes, four all together. The head was a circle punch. Muzzle was using the same circle punch and then reinserting the circle. Little nose was a heart punch.

The ears were the hardest. If I left them pointy (triangles) they looked to much like kitty cat ears. If I used round ears they looked like bear ears. Taking the face circle I cut them in half. The halves were then cut into thirds. After much frustration (I almost changed the tiger I was making) I freehand cut the points. All the free hand cutting made them all a bit different, but HYDRA Made!

After having all the head pieces cut out I then added all the stamped stripes. I tried a few different colors on the orange. I picked red. I used a stamp for the four side stripes and the top middle stripe. Then I used a narrower triangle to do the first and third top stripe. I used a third wide triangle for the inside ears.

I then put all head pieces together once the ink was dried.

I used take out chopsticks to apply glue to attach the ears and nose. To attach the muzzle to the head I used double sided sticky foam. (I had the foam from scraps of stamp assembly.)

I used additional foam to attach the head to the front of the card.

The tiger is now peaking through the forest!

I really wanted on the front of the card to have a #1. This will be the only time she will be one and I wanted it right there in front. I planned on making a tag.

Husband wanted the tiger to have a tail. (I should have known better then to ask.)

A tail and a tag with words was way more then I wanted to put on the card. Then there was brilliance.

Husband came up with making the TAIL be the 1. 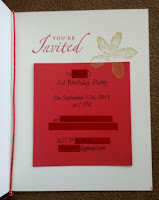 We drew a couple. Since I had to free hand cut the tail we took that in consideration of the final choice. Using the outside straight cut as a guide for the inside width of the tail. They don’t have to be perfect because they are HAND Made, plus an invitee will only get one so they will not know there are differences.

I attached the tail with double stick tape. I placed them about where I thought the end of the tiger would be.

I lastly tied a red metallic string to finish the look. Now I tied the them initially on a scratch piece of card stock so I didn't mess up the cards I was making. Then slipped them onto the finished cards.
Ta Da.

The US Postal service did have issues with one and wanted more stamps. Which was convenient since I was seeing them the next day so I just handed them the invite.
Posted by Hydra at 6:53 AM 2 comments:

Email ThisBlogThis!Share to TwitterShare to FacebookShare to Pinterest
Labels: crafty, life, The Spawn

aka @medievalnurse your husband, @Ratshag, messaged me over a year ago ... At the time I was naked ... actually my feet were naked.

I was debating buying these leopard printed flats. Totally cute. I was going to wear them to a party. But it was not like I NEEDED the shoes. They were just TOTALLY CUTE.

I let him talk me out of buying them...

There was no reason that I let him other then timing. It is now a year latter and I am still THINKING of the shoes your husband helped convince me not to buy. 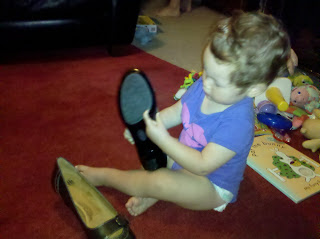 My thought when I was in line to buy them...